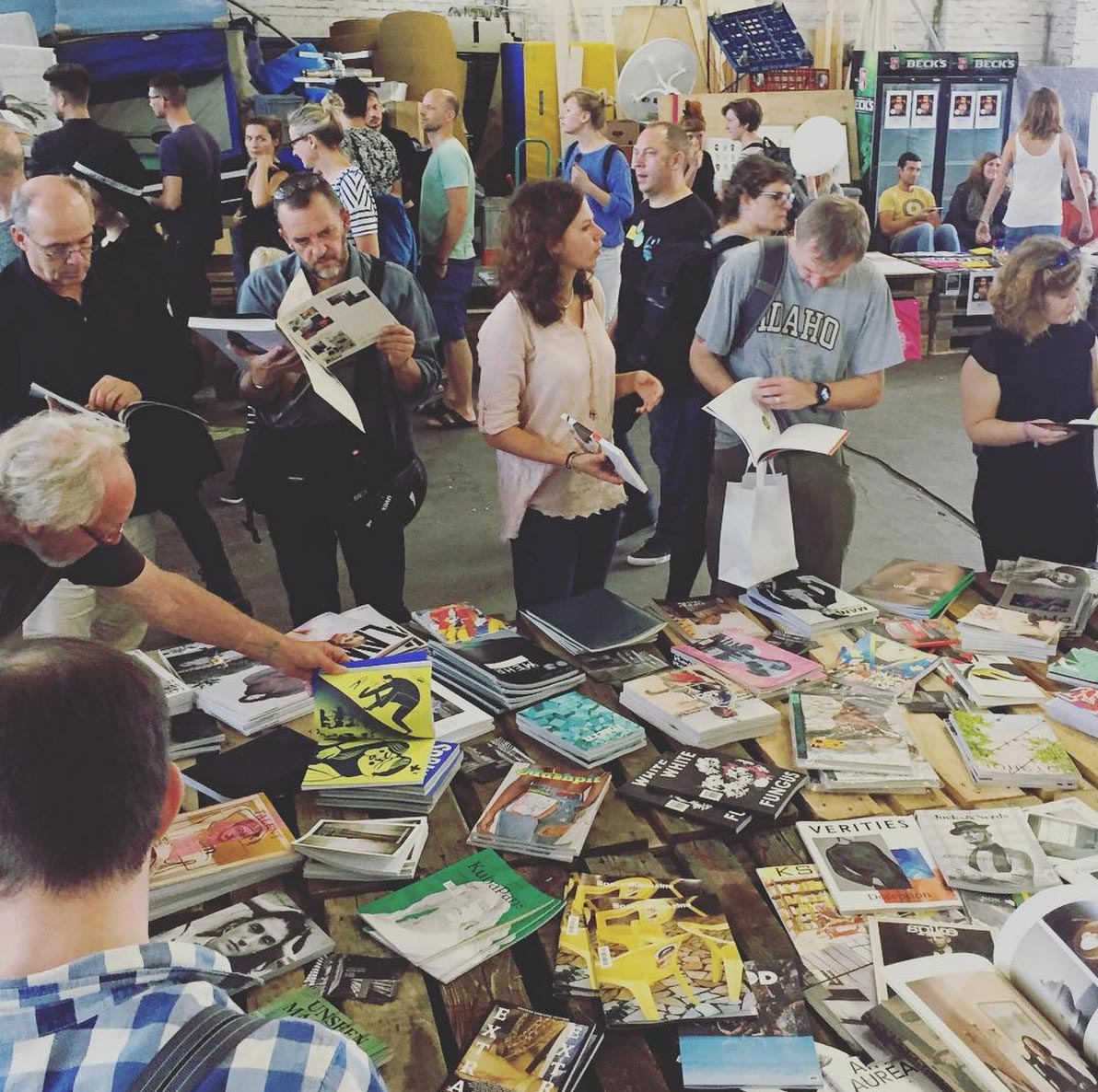 In case you haven’t heard, IndieCon is a two-day conference happening in Hamburg, Germany where magazine makers (some international, but most from Germany) meet to discuss the challenges and opportunities around independent print publishing. It’s an event that targets industry ‘insiders’, with a mix of existing publishers (small and large), aspiring publishers and some general media folks. This year, the organisers added an additional third day and a public element to it: the Indie Mag Day – a flea-market-style trade zone for anyone to discover, buy, and swap magazines of all kinds.

IndieCon has only happened twice, but it’s quickly become one of my favourite events of the year. Malte, Urs, Arne and all the friendly volunteers behind it have created something very special. They realised that there is no existing platform for this new wave of indie magazine makers to connect. IndieCon provides this platform in a smart, unpretentious way, while cheekily telling the larger media world to take note. It manages to briefly put the spotlight on the hidden creativity that can be found in small publishing projects. Thank you for putting on a great event, guys!

For me, it was the added Indie Mag Day on Sunday that made the event extra special. Set in an old, run-down warehouse, publishers and stockists presented hundreds of magazines – from small local zines to larger international titles. And what would have been an amazing event for being able to meet likeminded publishers alone, the massive turnout of curious readers, buyers and collectors made it all the more successful for everyone involved. There was an extremely positive vibe in the air: finally, a place for magazine aficionados to geek out!

Just like last year, I had many wonderful conversations throughout the weekend. I met a lot of smart, creative people and learned a few things about magazine making along the way. There were two points of discussion that came up several times – on and off stage – that I want to briefly comment on here:

The first has to do with substance. Some people – mostly journalists and publishers working for the more established/traditional media outlets – are still lamenting over independent magazines having no substance. They call them ‘pretty objects’ with nothing to say. Designers shouldn’t be in charge of making a magazine, they say. It seems that in their eyes every publication has to invoke some deep and meaningful socio-critical debate. It’s this view that was the main message of last year’s keynote by Oliver Gehrs, too.

Ok, look. While I personally think some indie mags do in fact make that statement on society, most indie mags do not claim to be journalistic masterpieces, nor do they want to critically analyse [insert big issue of our time]. Many of us really just want to explore a topic we feel ‘passionate’ about. We hope to be able to gather enough people around us that feel the same way and then connect through shared interests. Some people do that through an online forum, a Snapchat channel or a conference – we do it through a magazine.

Why are so many journalists and other literary folk convinced that their medium of choice deserves ‘more substance’? Most of us seem to be OK with magazines on fishing, golf, boating or gadgets being sold on newsstands (with no apparent reason to exist other than to serve their specific interest group). Yet, as soon as a small team of designers or travellers or food enthusiasts experiment with the printed format as an outlet for their interests and ideas, some call it overdesigned fluff.

The print industry, especially the more commercial side of it, is in the midst of a massive upheaval. I can understand that it feels threatened by us. But if I was a professional journalist, I’d be much more worried about the digital world depreciating my job than a bunch of indie magazine makers. So, can we move on from this debate, please?

The second thing I heard people voice their concerns about is the idea of commercial success and how money inevitably impacts editorial decisions.

Yes, there is obviously a moral debate about where advertising can and can’t go. It’s a debate that’s been going on forever. However, too often I hear publishers say that they ‘hope to figure out’ the commercial side of it all later, after they produced a couple of issues. While I can understand the self-sacrificing enthusiasm of my publisher comrades (been there!), one of the many challenges of making a magazine is to make a business case for it. If you don’t plan on making it financially viable somehow, there is little reason for making a magazine in the first place.

That’s why I’m slightly critical towards using Kickstarter as a way to fund new magazines. Because more important than the initial funding is a business plan or a commercial strategy (whatever you want to call it) that outlines how the mag is going to survive long enough to build a loyal, ongoing readership.

Let’s not forget that magazines and print publishing in general have always had a commercial element. It’s one of the many loose ends we need to figure out in publishing. The great thing is that, as indies, we don’t need to adhere to traditional business models. We can experiment, try out new ideas and explore new opportunities in order to, yes, make money from all the hard work we put in. So, don’t be shy to ask for money. Stop feeling dirty when talking about money. And most of all, don’t put off thinking about money until it’s too late.

By the way, by no means do I claim to have figured it all out! Making Offscreen viable is still a challenge, but from issue No1 I had a clear idea, a goal, of how I wanted to finance the magazine with the result that my current sponsorship model and a fairly high cover price seem to work – work well enough to make more issues and not starve to death doing so.